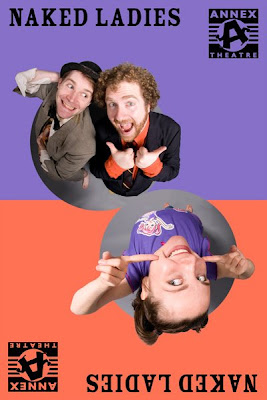 Seattle Weekly:
Sorry, fellas, it’s not what you think. Annex Theatre, Seattle’s “longest-running fringe organization,” may pride itself on boldness, but I doubt Concerned Women for America will be picketing anytime soon. Rather, we’re treated to an evening of unrepentant oddness. Two brief actor-authored comic sketches lead to the main course, in which a wily female coyote (Becky Poole)—who does occasionally flash her tail—and two ne’er-do-well vaudevillians (Ben Laurence and Paul Gude) brawl over a mysterious suitcase provocatively marked “Naked Ladies.” At moments the fringesque absurdity became spastically cartoonish, and, like Chris Crocker’s tearful ode to Britney Spears, downright bizarre but impossible to turn away from. JENNA NAND 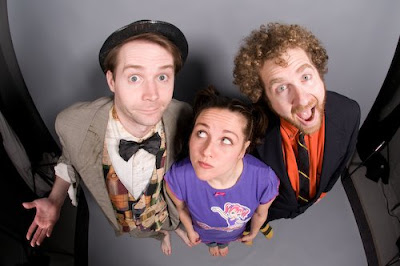 Capitol Hill Times:
(I can’t seem to find their archive of the story, so the entire thing is reprinted below.)

‘Naked Ladies’ a vaudevillian, ’40s road-flick romp
By Rosemary Jones
05/23/2008
If you’ve got a great big marquee outside your theater, what do you immediately think of?

As part of the general spruce up of the old Northwest Actors Studio space, Annex Theatre added a new signboard on the outside of the building. Staring up at that sign, Laurance immediately saw the curbside appeal of “Naked Ladies” written large above 11th Avenue East.

“Actually, ‘Naked Ladies’ came about when we were on Annex’s retreat last fall,” Laurance elaborated. “Bret Fetzer, Paul Gude and I decided to work together on a show. Paul wrote up an outline, e-mailed it to me and I wrote up the first draft of the script.”

Fetzer, Gude and Laurance had plenty of experience working together on Annex’s late night show “Spin the Bottle.”

“When Paul and I do Spin the Bottle, we’re the guys who do spectacle. Whatever Bret charges us with, like pulling on sleeping bags and Sumo wrestling,” said Laurance, who has been acting at Annex since 1999.

Fetzer, Annex’s artistic director, loved the ideas that Laurance and Gude proposed for the new play. “Naked Ladies” finds two vaudeville comedians wandering in a desert. The pair, played by Laurance and Gude, discover a briefcase labeled “Naked Ladies.” Neither knows what a naked lady might actually be, so they wonder just what could be inside the mysterious satchel.

“Ben and Paul are famous for doing bizarre things at Spin the Bottle, but this is quite different. There’s a story. And it’s full of bits that spin off comedic influences like Marx Brothers,” Fetzer said.

“Paul and I really wanted to do a full length show. In Spin the Bottle, our pieces fall into the three- to five-minute range. This was our chance to develop more,” Laurance said.

Despite the message written on the outside of the briefcase, there’s only one lady listed in the program – actress Becky Poole – and she plays the fully-clothed character of Coyote.

“Coyote is obsessed with the briefcase and appears in different disguises, trying to steal it,” Fetzer said. “Becky is wonderful with these changes.”

“Her solo work is surreal,” Fetzer said. “Kitty does these performance art type things and Becky maintains that 6-year-old perspective and keeps it from being ironic.

“Once they’d assembled the cast of three and settled on the basic ideas for the script, Fetzer said rehearsals became a refining process for the comedy inherent in “Naked Ladies.”

“The opportunity to work with Paul, Ben and Becky was one attraction for me,” said Fetzer, who maintains a full schedule with his own career as a playwright. “And I was interested in directing comedy. And I really enjoy directing a script that isn’t mine!”

Fetzer continued, “When it’s my play, I can be totally ruthless. This I could approach with more of a joint esthetic, really polish it until it is as good as it can be.”

Sometimes the polishing process deletes a really good joke, Fetzer revealed. “We wanted to have an ACME joke (from the old Roadrunner’ cartoons) because Warner cartoons were such an influence. At one point, we did have an ACME joke, but it just took us out of the narrative of the show. So it was cut.”

“I felt a little sorry for the cast of the mainstage show during rehearsals,” added Laurance. “There they were, working hard and probably feeling like they were missing out, because we were having so much fun rehearsing our play.”

“Naked Ladies” will play before the late-night crowd, with performances starting on Fridays and Saturdays at 11 p.m. and running to a little past midnight.

Laurance and Gude’s fans from “Spin the Bottle” will enjoy this show, added Fetzer, and find some new depths in the talented pair.

“I think of them as a type of Hope and Crosby in this. Neither one is exactly the straight man, they both get off their jokes, but it does have that classic feel to it,” he said. “They originally wrote Naked Ladies for Paul to be the comic and Ben to be the straight one. But as we rehearsed it, we found it was funnier if we reversed that. So Ben is playing Paul and Paul is playing Ben.”

And to find out what is really in the briefcase with its intriguing label, you just have to come to the show, Fetzer added.

Rosemary Jones writes about arts and entertainment for the Capitol Hill Times. She can be reached at editor@capitolhilltimes.com. 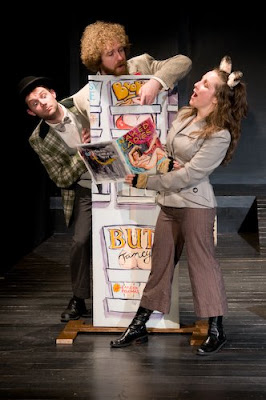