I shot and edited another film for Trial and Error Productions. I hosted the premiere at Seattle’s The Triple Door, with opening band Happy Orchestra.

I edited this Unique Home video for Zillow. All assets were provided by the client.

What happened when a stuffy child psychologist decided comic books were an evil blight upon the landscape? In this episode of The Panel Jumper, we examine the impact Dr. Fredric Wertham and the Senate Subcommittee on Juvenile Delinquency had on the comics industry in general, and EC Comics in particular. … Continue reading →

In the 1980s, DC held a phone campaign to let their readers determine whether or not Jason Todd, the second Robin to Bruce Wayne’s Batman, would live or die. This episode of The Panel Jumper takes a look behind the Bat-cave to examine why the readers made the decision that … Continue reading →

A puppet-based short film I shot and edited for Trial and Error Productions. It had its premiere screening at the SIFF Uptown. For more information, visit the producer’s page at trialanderror-productions.com 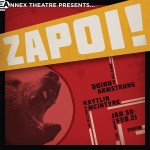 I set up a camera and recorded the final performance of Annex Theatre’s “Zapoi!” and subsequent strike and party. About seven hours condensed to 1 minute.