I Spun The Bottle

Everyone did very well.

We had no rehearsal and no real script. The only main problem was that the audience was so loud some of the best lines were inaudible.

Bruce was a talk show host with an “I Love Oatmeal” segment. I was the man in disguise who liked oatmeal a little too much. Ben was the owner of said oatmeal.

Ben, me, and Bruce, in an expertly staged shot: 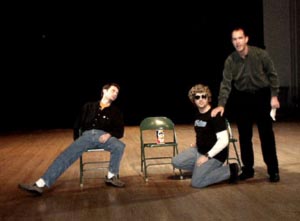 Stephen brings on the pop-tart, with whom the oatmeal has secretly been sleeping. The best line no one heard: 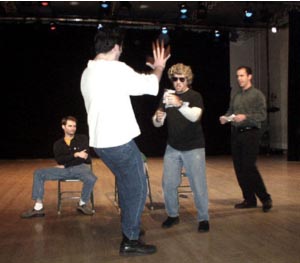 The lovely Alycia Neutrino filmed the exciting pop-tart beatdown, which may find its way online soon. Mike took pictures of the aftermath.