Chicken Jenny was a bird who wanted to walk the straight and narrow. She wanted to pack her shameful secrets in a steamer trunk and sink ‘em to the bottom of the deep blue sea. But trouble followed her like a pack o’ dogs chasing a meat truck on a hot July day. 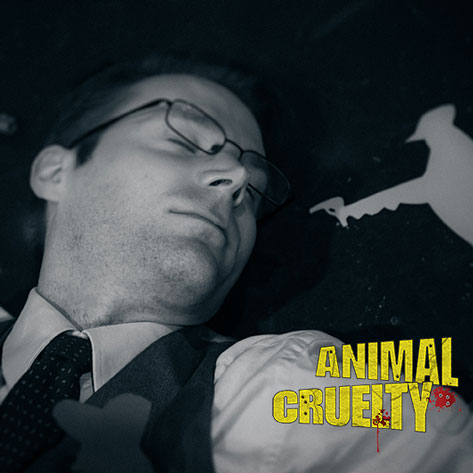 Printer’s Devil Theater in association with Theatre Off Jackson presents Animal Cruelty by Scot “Sgt Rigsby” Augustson, directed by Jennifer Jasper. Animal Cruelty offers a unique theater experience. These 2-D puppets have 3-D stories, emotions, and a fair amount of sex. Front and center is the big carnival wagon style shadow screen where the puppet action takes place. Off to the side is a table where the actors, who will provide voices and Foley sound effects, sit in full view of the audience.

“Honestly, could you ask for anything more out of a night of theater?” – Paul Constant, The Stranger

“The puppetry takes place center-stage in a large and ornately-painted, old-style puppet theater (belonging to the fictional Sgt. Rigsby, aka author Augustson), and while the puppetry (performed by Augustson himself, along with Ben Laurance) is not particularly impressive, it is visually clear and hilarious to watch. What is impressive is the precision with which the puppet action synchronizes with the voices of the actors, who sit stage-left in full-light and fifties-era costume, voicing the characters and making the Foley sounds as if for a live radio show.” – Blair Peters, dramainthehood.net

“With a multitude of characters, I was struck by the cast’s ability to develop each so extensively. Many characters only appeared once or twice on the silk screen, but each of them featured their own distinct accent, specified personality traits and unique comedic style. Given that only four actors play all 50 characters, it was quite impressive.” – Darlene Graham, The Spectator

UPDATE! On 8/4/14, Animal Cruelty was honored with a Gregory Award nomination for Outstanding New Play and Outstanding Light Design for Patti West.